MARK Twain is reported to have said that ‘too much whiskey is barely enough’,and it seems young Perth drinkers are heeding his encouragement for a drop or two.
Local distiller Alasdair Malloch says Western Australians’ increasing partiality to bourbon (whiskey), has prompted him and fellow distiller James McKeown to launch a plan for a new bourbon distillery in Perth – Whipper Snapper Distillery.

They want to build a distillery that will attract young, ‘urban drinkers’,as well as capture part of the tourism market by running tours. “Single malt whisky and scotch is something
that’s (consumed) a bit more by the higher age range of our target market,
whereas a lot of younger drinkers are drinking bourbon, and all that’s available is American,” Mr McKeown says. The men have invested $50,000 in equipment from the US and so far have raised about $200,000 from private investors. A
further $3.2 million will be needed over the next two to three years to achieve full production and commercialisation.
Some of the best talent in international spirits production have also been recruited, with Frank McHardy from Scotland and Colorado distiller Tom Cooper joining the
company.
Mr Cooper’s experience includes establishing the Colorado Gold Distillery, which
he sold after four years, tripling his money. He says Whipper Snapper will have competitive edge over American bourbons such as Jim Beam and Jack Daniels by matching the quality but also being locally made, much like he did with Colorado Gold.
“I spent years building the (Colorado Gold) name and getting it on the shelves
and people know what it is,” Mr Cooper says. “People buy it (despite the higher price)
because of the mystique that it is not produced by a large corporation.”
Mr Malloch says Whipper Snapper will push that local presence to encourage
people to pay $80 for a bottle of bourbon. “That local brand ‘home’ is really important
and that people can see and meet the distiller … we’ll bottle it ourselves so we
can guarantee the quality of everything,”
Mr Malloch told Gusto. “Little Creatures was successful using a very similar model.”
Whipper Snapper will also produce single malt Scotch whisky, which will
sell for around $90 a bottle, but bourbon will the primary focus because of the
shorter, two-year ageing process enabling a faster return on investment.
Moonshine, which requires very little ageing, will also be produced, and Messrs Malloch and McKeown say they’ll start tours started as soon as the distillery
is up and running.
The company is also pre-selling bottles of its prototype whiskey (currently made in the
US but using Whipper Snappers’ equipment) for $280 as a capital-raising initiative.
Mr Malloch says Whipper Snapper is aiming to be more than a ‘micro-distillery’ by
capturing a significant share of the market, including edging out international brands.
A search is under way for a venue for the distillery in central Perth, and Mr Malloch
says once that is secured production will begin immediately, with the first products
available soon after. 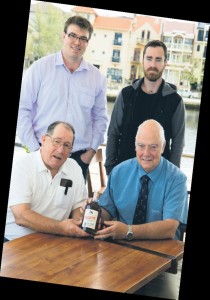 ARE YOU OF LEGAL DRINKING AGE IN YOUR COUNTRY?

Subscribe to Our Newsletter for 10% Off Our Online Shop
........
Simply enter your email
address to get your coupon code.